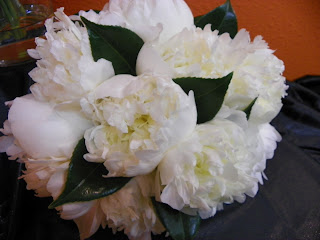 Peonies are one of the most popular flowers for weddings today.
The Peony has been a popular flowers as far back as the 12 century in China and Japan.
The plant has been used as medical treatments for bad dreams to pain relief.
Even today research goes on in the medicinal uses of Peonies.

It has been said that peony plants were often included as part of a dowry settlement amongst the wealthy elite of Chinese society during the Tang Dynasty.

Mischievous nymphs were said to hide in the petals of the Peony thus causing this magnificent flower to be given the meaning of Shame or Bashfulness in the Language of Flowers. It was named after Paeon, a physician to the gods, who obtained the plant on Mount Olympus from the mother of Apollo. Once planted the Peony likes to be left alone and punishes those who try to move it by not flowering again for several years. Once established, however, it produces splendid blooms each year for decades (Taken from The Language of Flowers, edited by Sheila Pickles, 1990).